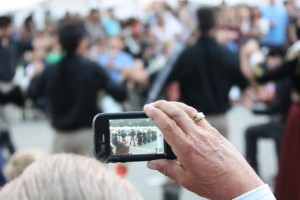 Maybe I am a Dinosaur, indignantly huffing and puffing, when a fellow ‘Photographer’ pulls out a camera phone and begins the customary predatorial stalk of a dialled in ‘Tog, going about their business?

Perhaps I am from another age, an age that believed that the fully loaded SLR/DSLR camera was too big, too unwieldy and would automatically put everyone within 100 metres on standby of a soul stealer in their midst, information transferred by some some of advanced sheep telekenesis?

I guess, like many others, I firmly believe the PERFECT camera design to wander the streets with, is in fact, a ‘Rangefinder’ style of camera- almost perfectly suited to the nobel Art of taking pictures on the street, by being small, light and pretty much unnoticed by the Man or Woman on the street, yet still instantly identifiable as a camera, expertly driven by a ruthless and streetwise hack, with perfect timing and an eye always looking for that sublime composition.

Maybe, I think too much.

The camera phone is the perfect tool for ‘up close and personal’ images-on public transport, in shops and restaurants, I can think of nothing that is so utterly unobtrusive.

I mean, simply everyone is constantly poking around with their phone, answering texts, accessing facebook or whatever, it is almost expected that people will have their camera in their hands, so composing and making an image is that much easier, these days-you don’t need to be self confident, cheeky or in any way ‘confrontational’-you can hide behind your iPhone and click away to your heart’s content-this is what makes me angry.

I LOVE new technology, let me get that out of the way, as early as I can. But I think there is a dishonesty to snapping away with a camera phone, a dishonesty that dilutes the skills learnt and practised by so many people who have served their time on the streets, with a camera. Those who have had to overcome their own shyness and reticence at pointing a lens at complete strangers, going about their daily business, but who have still been so keen to practice their craft, that they have put all personal doubts and worries behind them and taken the time to consider aperture, shutter speeds and ISO readings, compose the image in full glare of a not always friendly subject and finally, to push the shutter button and make the image.

I will never succumb to the easy way of making images on the street. I will never use a camera phone in my Art. I will proudly admit to being a dinosaur and hope that enough people get bored with the easy way and pick up a camera, to do things properly.

And as a reminder, here is an image of a true master of the genre: HCB.